Tuesday I had a hospital appointment in the afternoon in the afternoon so shifted my work rota around so that I didn’t have to work an evening shift. Got up at 5am (yes even I didn’t believe it) and took the dogs for a walk – they weren’t as bouncy as normal but that was good for me!

Got back at 5.45am and changed into my running stuff and headed out for a short run – according to plan it was 2x 5 minutes run and 2 x 5 minutes walk which was just enough after the dog walk which loosened me up.

I did everything I was taught, short strides and held myself upright and I managed 3 minutes running before I walked for 7 but then I managed to run for 5 the next time and things were getting easier. I went to Upper Settle, through town and down to Booths and by the time it was my 5 minute walk I was nearly home.

Don’t get me wrong while I enjoyed the run, I think I enjoy my bed more and I would rather have sleep and run later in the later.

After my morning shift at work I had an appointment at the hospital for results of tests that I had the previous week. Luckily my good friend Sam came with me and I knew when I was called in that it wasn’t going to be good.

I have been diagnosed with stage 2 Breast cancer which has spread to my lymph nodes. The course of treatment is an operation followed by chemotherapy. I am staying very positive BUT there were a few things that would have to be put on hold and one thing was the Great North Run and the Race for Life that I had booked for July 12th.

This year is for getting my health back in check and I have already had an email from GNR to say that they have deferred my place for 2016. I have had fantastic messages from support from all my friends both at work, running mates and Jill my running coach who is as disappointed as I was that I have not been able to complete my journey.

Mine might last a little longer – the special bit of my 50th year is that I have hopefully been able to catch the cancer early, detection was found not because of a lump but because of my age and because I asked for one! Remember ladies we of a certain age need to look after ourselves.

So this molly can run but it might be sporadic over the next few months and weeks. 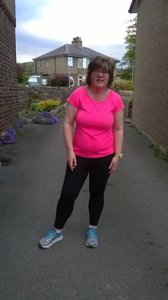