Running has never been easy – who am I trying to kid – in my head I am a gazelle with slim thighs floating on air with my  ponytail bouncing along! (if you have seen me recently this might take a few months!)

Well that’s in my head but in reality I am more like a hippo or elephant but since hippos can run 30km/hour they can well out-run me so its just the size that I can equate to and I bet they would look better in some of the running outfits I have tried to squeeze into!

But no matter how I look or how slow I am the one thing I have got is an amazing bunch of friends who run, some are like me and aren’t afraid to admit that things don’t come easy (not naming anyone) and there are others that I look at every week on their posts with proper envy wishing my body and legs (mine and far too short and dumpy) could be swapped over – even just for one day. 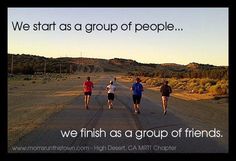 They are so supportive of everything I do whether its a training run of a few miles or shuffling round a race. And it was this week that I attempted my first ever Park Run and found that it was not only the love of my running friends I know but another community that I don’t – runners are quite special.

Don’t really do 5k’s as they are too fast and by mile 3 my lungs have just stopped exploding and I can start enjoying things (instead of stopping and eating cake) But I needed to get my speed up so decided to give it a go and while really nervous some people had dogs and that’s always an icebreaker for me – talk to the dog and the owner will always speak.

Didn’t help that it was poring down with rain and totally miserable but I started off with 30/90 run walk and was soon at the back – actually very must last! But when they started to lap me I go so disheartened but a marshal called James offered to go round with me on the 2nd lap and when people were cheering saying I didn’t have far to go not realising I still had another lap (and everyone else had finished) a lovely girl called Frankie did the last lap with me. Everyone waited in the rain clapped and I have never felt so humbled as they were all so kind. So like the Terminator said “I’ll be back”!!

Have kick started my running with hour coaching sessions with Jill Eccleston of http://www.runbikefun.co.uk/ and this week I was up at stupid o’clock to be training around the rugby field in the poring rain (well I do live in Yorkshire) working on my posture/arms and breathing. Hoping that all of my work and my upcoming races will stand me in good stead for the longer distances at the end of the year.