This was unfinished business from last year….

The Great North Run had finally come around, I was gutted when I was watching it on TV when I should have been running it, chemo had robbed me of 2015 but I was determined it wasn’t to do that in 2016. 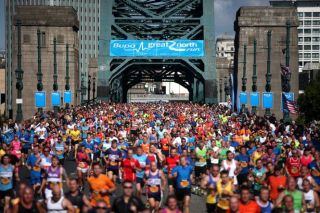 The Pasta Party started it all on Saturday and what a weekend! Got to meet some truly wonderful people Aileen who was going to my biggest support on the Sunday – matching me every step of the way and Elaine who supported me through my treatment having gone through it herself. Two wonderful women.

Fuelled up with free pasta and Aileen winning a guaranteed place for GNR 2017 from there we went to meet some friends at a nearby pub and who should turn up but the famous or should I say “infamous” Imran!

A good day was had by all – but had to get back to check-in to the hotel – near to a metro station but far enough outside of Newcastle that it felt like the suburbs. Class it was, from the staff who were courteous, gorgeous (that was the manager,when I arrived he personally took my luggage to my room!) and the room itself gorgeous

Tea was a massive cheeseburger and chips in the bar with a cheeky white wine (well I didn’t think its going to affect my time at this late stage) and I got talking to the bar man who told me his Dad had previously had bowel cancer and after 15 years was told a few weeks ago it had come back. Such an awful story, so Stuart along with my Dad, Ben, Peter and my Mum ended up being names on my back of people I was running for.

Bed was so comfy and my alarm was set for early o’clock! Having getting lost on the metro twice on the Saturday I wasn’t taken any chances!

SUNDAY – D-day and I was so nervous/excited and somehow managed to force some porridge and a slice of toast down – everything else was packed in my bum bag as I was going to the Kaiser Chiefs after party so no chance to return to the hotel.

Arrived way too early – well I am Swiss after all – but people watched at the Metro as they started to throng in. Some in fancy dress and others running for different charities. Met Aileen and a bunch of running friends to go and have a photo shoot – a camera has nothing on a drone!

Then it was time to get in the pen – at the back Party in the Pink – K that is! The build up was amazing and when they played Abide with me I was in floods of tears before we had walked a single step! Mind you looking around I wasn’t alone. 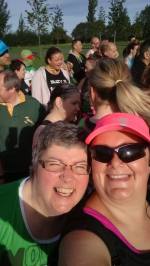 We waited as only patient running folk do for the stewards to release us and then we were off – slowly moving until after about 35 minutes we were over the start line and running. We had decided to run the declines and walk the inclines – the best was on the underpass – one person started oggi – then then the next and it was a continuous chant with reverberating echo! This was one of my highlights.

The heat was beyond unbearable and not the 17c they said it was – the showers, water, oranges an ice pops given out were much needed. Going over the Tyne Bridge was amazing and the crowd support would rival anything of London.

But I struggled, both my feet and my back were making things difficult and after a really good start I was beginning to slow. We had a good time on the sweeper bus though and just knew if I could keep it up like this he wouldn’t catch me.

A couple of rests and a toilet stop and seeing my Charity – Bowel Cancer UK at mile 8 gave me a boost but I felt poorly by mile 10 and all I wanted to do is lay down – and not get up again! The Red Cross at this point were wonderful – taking my blood pressure, bloods as I have diabetes (then offering me the bus to get me to the finish)

After 10 miles I wasn’t going to stop so reluctantly my grass bed had to be relinquished and Aileen helped me on my way towards the sea. Was heartbroken when the sweeper bus passed as I was getting up and I was determined to get as close as it as possible.

To the sea – and beyond – could see the 800m sign but it seemed so far away – the longest distance in an already long race. A face out of the crowds was Claire and a massive hug, tears again! Hand in hand Aileen and I finished the final bit, friends keep you motivated and positivity – I had that in bucket’s that day.

The relief I had to finish was overwhelming and the time was irrelevant but for those that want to know it was 4 hours 15 minutes and 25 secs without the medical and toilet stop it would have been under 4 hours.

Hobbling down hill to the beer tent was on the agenda but to be honest all I wanted to do was sleep – took my lymphedema stockings on my left arm off  to find my hand had swollen very badly!

Buying tickets early is not always a good idea as Aileen and Dave bought tickets for Kaiser Chiefs for half price but meant I wouldn’t be alone – actually I would have probably gone to bed. The energy of Ricky the lead singer made up for mine and at this stage I couldn’t even stand but just sat on the floor listening and watching the pyrotechnics.

So to sum it up – longest run since the awful London Marathon 2014, hardest race I have done, best supported, love Newcastle and the toon spirit. Will I be back. Hell yes – hotel already booked for next year. Ballot pre-registered. 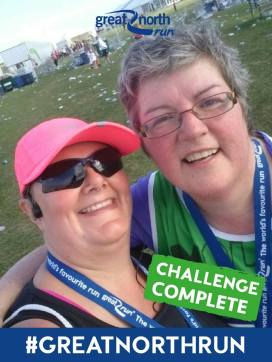 Please email mollyfox16@hotmail.com if you would like tickets for the Charity ball  November 19th – full steam ahead