Not stress about things although last week that was hard to do!

First three days I was on a First Aid Course – easy you might say – well when you have never bandaged even a teddy bear then things were a touch trying – bring into the mix that they think I want to be a paramedic with knowledge of CPR, heart attacks and anaphylactic shock then something I thought so simple turned out not so. Passed my theory but if you need me in a hurry wait until tomorrow as they thought someone might die in-between bandage-shock-recovery position and CPR so I failed and am back for re-test.

Since the GNR I have been limited to walking and no running so wasn’t looking forward to Sunday’s WR Leeds 10k at Temple Newsham – a great location around 90 minutes away from where I live but it meant an early start with dog walking beforehand.

To be honest I wasn’t in the  right frame of mind to do anything else that week after the course – energy levels were at an all time low – wasn’t getting any lie-ins as I was on constant dog walking duty since Mum was sunning herself by Lake Como trying to see a glimpse of Mr Clooney whilst she was there.

Despite being October the sun was shining – when oh when will it be cold and raining on race day – I hate warm – and neither did I realise that it was multi terrain with hills (and not little ones either) Never been a fan of mud and there was plenty from the rain the previous night and if I had wanted to do a tough mudder I would have signed up for one.

Prior to the start we could choose to do a 5k or 10k (one lap or two) so I decided I wasn’t going around again irrelevant of whether I got a medal or goody bag – I couldn’t face the mud and hills a second time.  Some races you just don’t like and this was mine – although everyone was really nice. 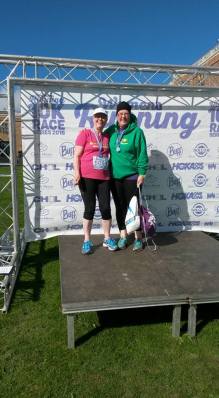 Sunday see’s the Yorkshire 10 miler at York and I am so under prepared – although I know I have done the miles in Newcastle I had Aileen by my side to keep me going – this time I don’t feel as optimistic. Plus the day after I am going to Ireland with work for 4 days so need to keep body and limb 100% OK.

Just over a month until the ball and the raffle/auction prizes are rolling in – we have had a £50 voucher from www.cottages.com who I work for and for the Auction the company Silentnight beds  http://www.silentnight.co.uk/beds/ in Barnoldswick have donated us a bed with mattress which is amazing.

We have also an unusual prize to auction an hours ride in a vintage Morris Traveller and then Afternoon Tea at Humble Pie in Earby https://www.tripadvisor.co.uk/Restaurant_Review-g672786-d8492238-Reviews-Humble_Pie-Earby_Lancashire_England.html

Plus if anyone is feeling a bit jaded Silhouette in Barnoldswick have given us a facial treatment – maybe I should have one before and not after the ball.  http://www.silhouetteskincare.co.uk/index.html

You will be able to bid on all Auction prizes if you are not going to be at the ball – these will be put in an envelope with your name and on the night the highest bidder wins!

Raffle tickets are on sale at £1 a ticket and to pay you can pay on my justgiving page https://www.justgiving.com/teams/Mollyfox16 and quote raffle tickets – I will then post on FB your ticket numbers.  Otherwise I have a Charity bank account email me on mollyfox16@hotmail.com for details.

Plus if you want Ball tickets there at still some left – £35 each monies to be paid by 30th October. (I really will stop boring you soon with all of this!)